After a five-year hiatus, I’m finally rejoining the world of community theater. WOOT.

I was never the lead in high school, but by senior year, I was cast as the comedic supporting role…and loved it!! I remember thinking, “Oh my gosh, I think I’m funny…” This whole time I had thought I wanted to be the ingenue, only to learn I REALLY just wanted to make everyone laugh and totally steal the show from the ingenue… I know, I’m a bad person. It’s cool.

“A Stud And A Babe” – I Love You, You’re Perfect, Now Change

“I Remember Love” – The Drowsy Chaperone

“Woe Is Me” – The 25th Annual Putnum County Spelling Bee

In college, I joined the amazing group “The Original Cast,” and continued doing musical theater just for fun. My favorite roles, still, were the funny ones… Like Logainne Schwartzandgrubenierre. I did occasionally play that good ol’ ingenue role, but often felt like I missed out on that little spunky punch I love about comedic roles. After graduating, I did a few community theater productions, including How to Succeed In Business Without Really Trying, Seussical the Musical, and a local writer’s new show entitled Call Me Home.

Then I got a new job, which included travel every other week, and community theater just wasn’t a possibility. It’s been on hold for five years now, and finally, my travel has reduced enough that I can make it work. So, I auditioned, and got in! Hooray! Community theater is a funny thing, where EVERYONE knows EVERYONE. Breaking into that little world is definitely a tad challenging, but hey, I’m just happy to be connecting and getting re-started.

In early August, I’ll be in Bat Boy, put on by Emerald City Players just outside of Columbus. 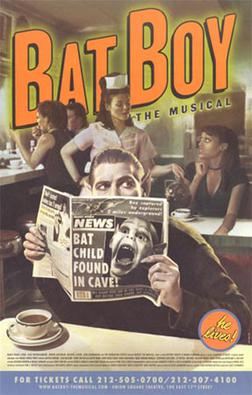 I admit, I have actually really loved this quirky musical since I first saw it in high school the music is fun and clever, and it’s a totally ridiculous plot based on that 1990’s “Weekly World News” article about a half boy, half bat being found. HA! It’s what you might consider a “cult musical,” which is perfect for a summertime community production.

There are four main characters, and then the rest of the ten-person cast (so six of us, if you’re bad at math) play two or three characters throughout the show. I’ll be playing Ruthie/Ned (oh yeah, most everyone plays a guy and a girl at some point). No matter who you play, you’re on stage a lot and you’re singing a lot! Who could ask for anything more? 😉 Seriously, can’t wait to dive back into that rehearsal grind, plunk out some fun new harmonies, and utter the words, “I can’t – I have rehearsal” on a regular basis. Happy Friday!

2 thoughts on “I’m Finally in a Musical Again!”